Our cookbook
“Cookin’ It Up for 40 years”
is now on sale! 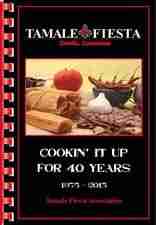 The first Tamale Fiesta cookbook, published in 1994, has now been updated to celebrate the 40th Anniversary of the Fiesta. Our “Cookin’ It Up for 40 years” is now on sale! It not only has all the recipes from the original cookbook, but new recipes as well. It is filled to the brim with the best recipes from the best cooks in our community past and present!  It would make a perfect gift! 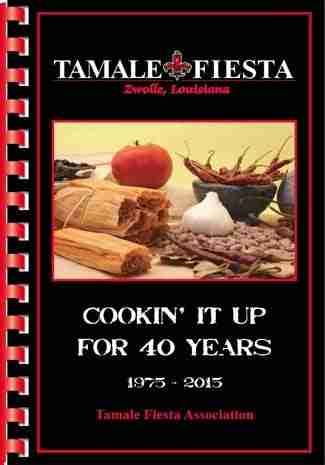 This cookbook will most definitely become a cherished keepsake on your kitchen shelf!

Don’t Forget Seasonings, Sauces and an Apron or two!!!

Try this recipe for our world famous Zwolle Tamales!! Boil shelled yellow corn in water with the lime in a large wash pot until the husks fall off the corn kernels and the corn becomes tender; Wash corn about 11 times to remove the lime, then drain.

The next day, have corn ground; mix with pure lard, meat broth and then salt to taste. Lard keeps the tamale dough from being sticky; test on palm or hand and if dough doesn’t stick to palm, then it is ready.

Wash and scald corn shucks; drain off water; place flattened corn shuck in palm of one hand with the other hand, daub corn mixture onto the corn shuck spreading it crosswise to both edges leaving both ends of the length-wise shuck free of dough, when a thin layer is daubed into the shuck; spread a heaping teaspoon of the meat mixture lengthwise over the dough; roll shuck lengthwise and fold one end over about two inches.

Stand tamales with folded ends down in a large cooker until the bottom is completely packed; Pour in about three inches of water—but do not cover the tamales. Fill the pot with the rest of the tamales which will be about ½ the recipe. Cover tightly and cook slowly for about 1 ½ hours—repeat for the second half of the recipe.